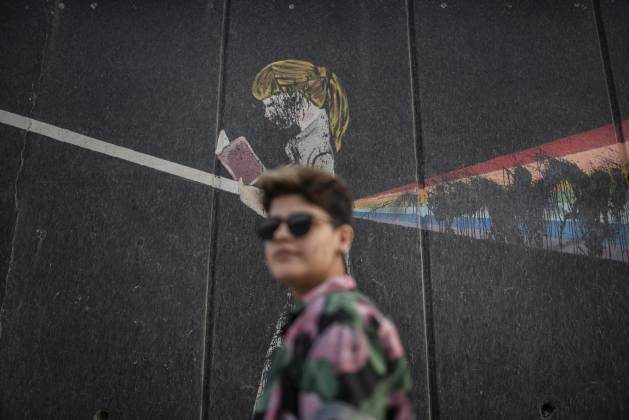 Defending Identity in the Face of Harassment, Stigma, and Death — A Global Issue

SULAYMANIYAH, Iraq, Nov 25 (IPS) – Most people in their twenties sitting on the terrace in the shade of a grove of trees are beautiful: black clothes, piercings, tattoos, and a few streaks of purple in their hair.

This could be a trendy cafe in Berlin, Paris or any other European capital, but the sunset call to prayer reminds us that we are in Sulaymaniyah. After Erbil, it is the second city in the Kurdish Autonomous Region of Iraq.

We cannot disclose the exact coordinates of the cafe, nor the full name of the person who brought us here. He was wearing white shorts and a T-shirt and showing off a rainbow bracelet on his left wrist. He asked to be quoted as Kween. “It’s just a queen with an ak for the Kurds,” he explained. Kween is a trans woman.

The youngest of five children of a Kurdish family in Diyala, a district in the east of the country, the 33-year-old Kurdi told IPS that he was a “boring guy” for the first 25 years of his life.

“I learned to block out my needs. However, I first dressed like a woman in my mother’s clothes and also did makeup when I was only five years old,” she recalls. In a dress, she added, “I feel the real me and the me I’ve always been.”

But the freedom most enjoy in solitude comes at a price. How to forget the beating his older brother gave him when he was first arrested, at the age of six; the humiliation and bullying she suffered at school…

He was almost killed when he was 24 years old. Someone contacted him on the Internet and asked to meet in the suburbs. But they were five people, waiting to hit him. Completely numb from the beating and covered in mud and blood, Kween still mustered the strength to make his way to the local magistrate’s office.

“You have two options: file a complaint and tarnish your family name forever, or stop doing what you’re doing,” the judge told him. Back home, he couldn’t say what he had experienced or, especially, why. Even today, no one in Diyala knows that Kween is a girl.

Against all odds, he has worked for several years with foreign NGOs focused on protecting vulnerable groups. Among other projects, she is working on a list of Kurdish words to talk about the rights of LGBTI people that don’t offend.

An example: Hawragazkhwaz (literally, “a person who is attracted to his own gender”) is, so far, the only inclusive form for “homosexual;” miles away from commonly used terms that include ideas like “pedophilia” or “rape”.

Kween hasn’t decided to have surgery or take hormones yet, but she doesn’t have much time for that either. Work in NGOs and finding a place in society for members of the LGBTI community, he said, took up most of his time.

“If I had a mission in life, this would be it.”

A transgender woman was beaten, burned alive and thrown in the trash; assailants tortured, then killed a gay man while his partner was forced to watch; a lesbian is stabbed to death when told to stop her “immoral behavior”.

These are just three cases among many included in a Human Rights Watch report on LGBTI people in Iraq released in March 2022. The kidnapping, rape, torture, and killing of queer people at the hands of armed groups, “often by state security forces, ” was also reported.

“Members of this community live under threats of arrest and death by Iraqi police, and under complete impunity,” Rasha Younes, an HRW researcher, said in the report.

The images of gay people pushed by ISIS from the rooftops are still fresh in everyone’s minds. Also posted by Doski Azad, a Kurdish transgender woman Instagram before his body was found in a ditch last February. He was killed by his own brother.

“I know a lot of people who have never taken to the streets,” Varin, a 23-year-old queer activist told IPS from the same terrace. Thanks to the Internet she discovered that, like her, there are people who don’t feel identified with any gender expression.

The activist works in swimming pools, but her chemistry studies have opened up job opportunities for her in Qatar that she doesn’t want to miss.

“I showed up for a job interview dressed as a lady and, of course, with long sleeves so the tattoos weren’t visible,” she guffaws.

Varin pointed to “about 30 members” in Sulaimaniyah’s LGBTI community. They met in a cafe like this. Social networks also make it easy to get to know one another.

Did they organize protests? No, too dangerous. In fact, the mural he was going to choose to pose for our photo had already been vandalized (to be completely destroyed a few days later).

Despite these threats, this Kurdish city has become the safest place in the country for members of the LGBTI community. Many oddballs from the south of the country have sought refuge in cities like Erbil, the Kurdish capital of Iraq.

The situations are by no means comparable, but Varin underlined that Erbil is still a very conservative city, “one of those cities where time stops during Ramadan and where you can never let your guard down.”

In April 2021, several Sulaimaniyah youths were arrested “for their homosexuality and immoral behavior”. That’s how the operations leader labeled him in front of the press. The Sulaimaniyah Police refused to answer questions from IPS. Nonetheless, the abuse seems to extend to anyone who might dare to show any kind of support.

As well as Flavor, a local NGO is constantly being forced to answer justice for “promoting the LGBTI community”. They are still awaiting trial after the latest lawsuit was filed by Kurdish lawmakers.

From his office in Sulaimaniyah, asked Kamal Darwesh, the director Flavorconvinced IPS that their mission was not to promote the LGTBI community but “to raise people’s awareness about it.” But what is more worrying, he added, is that collective member-capturing is still the common currency in the Iraqi Kurdish region.

“Instead of accepting the existence of these people, they insist on criminalizing them: they are accused of prostitution, drug trafficking or whatever it is to get them off the streets,” the human rights activist lamented.

“All clans, parties, leaders, whether religious or political, are equally hostile to them strange collective. They often turn to religious issues to justify violence, or to just make politics out of it,” gathers Darwesh.

Their helplessness is overwhelming, and the psychological impact of intolerance towards this group translates to cases of depression, anxiety, post-traumatic stress, and even suicidal tendencies.

That was the diagnosis presented to IPS via videoconference by a trauma psychologist who chose not to give his real name for the interview. She has worked with victims of sexual violence and torture in the Middle East for more than a decade and she wants to avoid the veto at all costs.

As well as attacks on almost every level, he also highlighted the risk of being “excommunicated from the labor market, or even from their own families in areas where they play a key role.”

After several trips to the region, the specialist had the opportunity to meet Varin and Kween in person. “Besides hoping for the community, they also offer space to ask questions,” he said. “Just by looking strange, they already show great courage.”

Bookmark or share this with others using some of the popular social bookmarking websites:

Link to this page from your site/blog