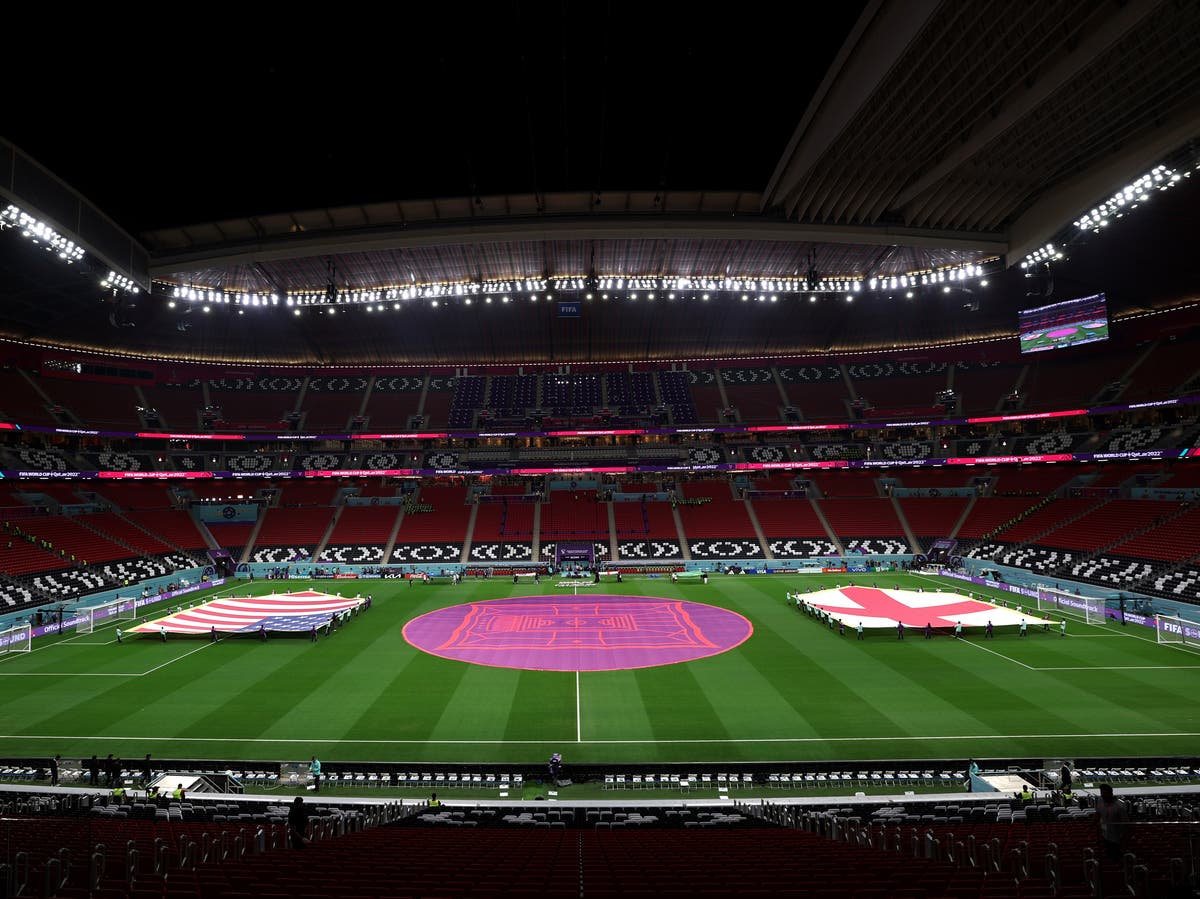 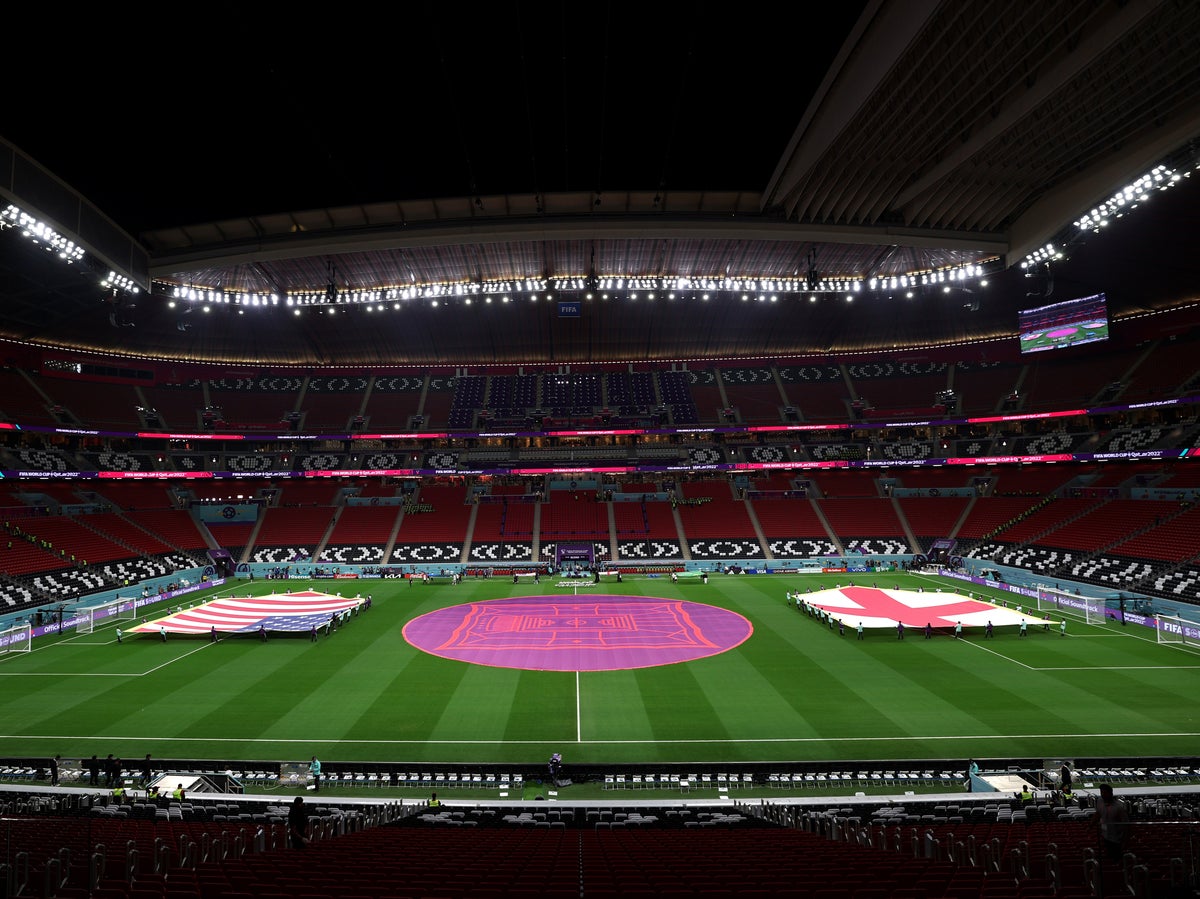 England face the US in World Cup Group B on Friday in Qatar. The Three Lions won their opening game in style against Iran, clinching a 6-2 victory as Bukayo Saka, Jude Bellingham, Raheem Sterling and Jack Grealish all scored for Gareth Southgate’s side.

Harry Kane has recovered from injury and is fit to play after undergoing a scan on his ankle this week, while Harry Maguire has also confirmed he is ready to start after illness. Therefore, Southgate is expected to name an unchanged team.

England are looking to end an unwanted streak and claim their first win over the US at a World Cup. The US famously beat England at the 1950 World Cup, before a Rob Green error resulted in a 1-1 draw in South Africa in 2010.

Follow all the latest England World Cup news ahead of the game against the US, below.

Jordan Pickford hopes England get fair treatment from officials after boss Gareth Southgate said he was “concerned” that his team had been used as an example during a pre-World Cup refereeing meeting.

England were denied what looked like a clear penalty when Harry Maguire was caught by Rouzbeh Cheshmi early in their 6-2 win over Iran on Monday.

VAR decided not to intervene but then notified the referee of the shirt tug in England’s box which resulted in Mehdi Taremi scoring a last-minute penalty, while a similar offense resulted in a spot-kick in Argentina’s shock loss to Saudi Arabia on Tuesday.

England and six other federations fear their captains will be shown a red card, and that there is essentially “unlimited liability” should they wear the OneLove armband in their opening World Cup game.

There won’t even be the prospect of an iconic photo, as any sanction will be given before the team leaves for the field. It is for this reason that the federation is eager to take decisions out of the hands of the players, and not put pressure on them.

The relatively small armband movement – the protests against the law and Qatar’s attitude towards LGBTQ+ people – has been one of the biggest issues in the highly controversial World Cup. The German federation has accused FIFA of “extreme blackmail” in the discussions, and there are genuine fears that the likes of Harry Kane, Virgil van Dijk and Gareth Bale could be suspended.

Kane injured his right ankle after an awkward challenge by Morteza Pouraliganji in England’s 6-2 win against Iran on Monday – the national team’s biggest win at the start of a major tournament.

The Spurs striker, who has a history of ankle problems, played 25 minutes but appeared to be limping after the game and underwent a preventive check.

But the 29-year-old received the green light to train on Wednesday, with England’s official Twitter account sharing a photo of him in training accompanied by the caption “captain” and a fist emoji.

Gareth Southgate has not ruled out his England team making the gesture to highlight human rights issues at the Qatar World Cup but said they would not be pressured to do so.

The seven European nations competing in the World Cup – including Germany, England and Wales – had planned to wear the OneLove anti-discrimination armband during the tournament, but were persuaded to do so following FIFA’s threat of sporting sanctions.

Southgate, whose team face the United States in their second game on Friday, said: “I don’t think we should feel any pressure – I think we’ve been talking about certain topics for over a year and we’ve been supportive in every way. good cause either individually or collectively.

When England started playing ball against Iran, they felt something different.

“Definitely clicked,” said John Stones of the 6-2 victory. “Or the desire to fix it. We have come out of a bad period.”

They can now see through to the other side. England scored more goals against Iran than they did in their entire Nations League campaign. In reality, however, it was a step up from Gareth Southgate’s general style than it has been in just the last eight months.

“I don’t think people would expect us to be like that after watching us for so many years and the style of football we play,” the manager admitted. “Maybe we’re regressing to the norm.”

The challenge now is to make it the norm, and portray it as not partly a product of the chaos that Iran has been in; that the UK has announced their credentials.

When England youth football hero Jude Bellingham returned to the pitch in Qatar on Friday, friends and neighbors in his hometown of Stourbridge in the West Midlands were full of pride.

And none more so than the former elementary school bouncer, who used to retrieve lost balls from the roof when he was a kid.

“It seemed to be a daily occurrence,” says Mark Williams Independent. “You could tell at the time he was a pretty good little footballer and he was meant to be.”

“He seems to do that more than other kids. It became a joke. Every day the stairs go out. I keep them on high alert for that reason.”

He added: “He’s a really lovely kid. He always asks you to get the ball down well.”

This makes the midfielder the second teenager – after Michael Owen – to score for the Three Lions at a World Cup.

Jude Bellingham’s hometown is proud of a boy who trains so much he wears turf:

World Cup 2022: Who is the official for England vs USA Jesus Valenzuela?

Jesus Valenzuela was the referee for England vs USA in the World Cup tonight.

The Venezuelan took charge of his first match at the World Cup after being selected as one of 36 referees at the tournament in Qatar.

The 39-year-old is considered one of the best referees in South America – officiating in Copa America, Copa Libertadores, Copa Sudamericana and South American World Cup qualifiers.

He became a professional referee in Venezuela’s top flight, where he officiated nine matches before the league was suspended for the World Cup.

However, in that match, Valenzuela showed seven red cards, as well as a series of yellow cards.

World Cup 2022: What time does England vs USA start today?

The opponents this time will be the United States, who drew with Wales – although Gregg Berhalter’s side will no doubt regret the fact they were so dominant in the game from the start and failed to build up their advantage enough to claim all three points.

The USA knew that even if a loss would make matters difficult, they would still have to face Iran in their final match – apparently the weakest of the quartet, with a potential four points which would be enough to qualify depending on results elsewhere.

Bukayo Saka’s brilliant form in the Three Lions opener is sure to mean he will retain his place, with perhaps only injury possibly keeping Gareth Southgate from changing his line-up.

Group B matches will kick off at 19:00 on Friday, 25 November at the Al-Bayt Stadium in Al Khor.

England will qualify for the knockout phase of the World Cup if they beat the United States on Friday.

Here’s a closer look at the side hindering Gareth Southgate’s squad.

England will qualify for the knockout phase of the World Cup if they beat the United States on Friday.

Ahead of the Group B game at Al Khor, here are the five main talking points.