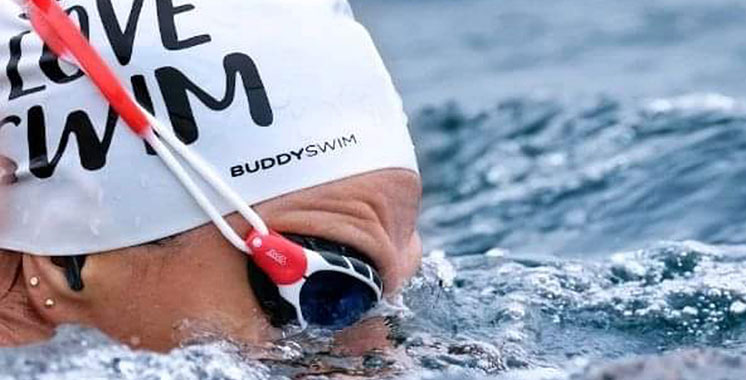 Morocco Swim Trek, “Swim in the Sahara” back

This will be the 7th edition that will take place from November 29 to December 4. of a sporting event different from the others… The details.

After two years of interruption due to the Covid-19 pandemic, the Dakhla lagoon is preparing to host, once again, the Morocco Swim Trek where 120 swimmers of 20 nationalities will compete. Organized by Open Water Event in collaboration with the Royal Moroccan Swimming Federation, this open water swimming competition represents a race in 4 stages over a total of 30 km. “Since the launch of the Morocco Swim Trek in 2015, we have seen the number of participants increase throughout the editions, going from 60 in the first edition to 120 today or 140 in 2019. An evolution that is also noticeable level of the nationalities represented, since this year we received French, American, Brazilian, Romanian, Swedish, Slavic, Belgian, Italian, Spanish, German, Moroccan and even Israeli swimmers. Today, we are more than proud to have made this cosmopolitan event an ode to diversity and exchange”, explained Edith Molina, founder and organizer of Morocco Swim Trek.
This year, a 16-year-old Moroccan swimmer will swim alongside a 65-year-old swimmer, dean of the edition…
As a reminder, this Open Water Trek revealed Moroccan talents the previous edition, in particular Mohamed Yassine Bensaleh and Yasser Benchebba, aged 19 and 20 respectively. The two young swimmers took first and second place in the non-wetsuit category. They were followed by Italian swimmer Fabio Calmasini, 51. Apart from the race itself, awareness workshops are planned for the youngest, through actions carried out in collaboration with local associations. In 2018, the event welcomed Anne France Didier, president of the Défismed association, director of the Plan Bleu in the Ministry of Ecology -France-, in charge of piloting the ODD14 Ocean in the sea and coast delegation.
Another axis retained by the event, that of solidarity and sharing. “Organizing the Morocco Swim Trek is a way to share our passion and promote a region that is dear to us. We are lucky to have around us a team of friends and volunteers who share the same values, as well as partners who have always supported us”, explained Renata Thieck-Alami, a member of the Moroccan organization Swim Trek.
Nadia Ben Bahtane, the first Moroccan to swim solo across the Strait of Gibraltar in 2015, and Jacques Tuset, world-renowned French swimmer, will take part in this year’s adventure. Along with them will be ambassadors such as Dino Sebti, a passionate swimmer who crossed the Strait of Gibraltar in 2017, the Brazilian professional swimmer Thais Sant’Antana, the coach of the Swedish open water swimming team Mikael Rosen or the French triathlete Toumy Degham.
Three swimmers compete to raise money for charities. Nadia Ben Bahtane and David Reynal respectively represent Pink Wave, an initiative to fight cancer, and Clotilde Marchal from the PSE Association -For the smile of a child-. “I am happy to be part of the Morocco Swim Trek adventure since its first edition. And this year even more, since I am swimming for a cause that is very dear to me. I am also particularly proud that Morocco is hosting an event of such quality and magnitude. A competition that has earned the loyalty of several international swimmers who return for the beauty of Dakhla, the unique format of the tests and the spirit of sharing and friendship that makes the Morocco Swim Trek special”, concludes Nadia Ben Bahtane, godmother of the ‘event.